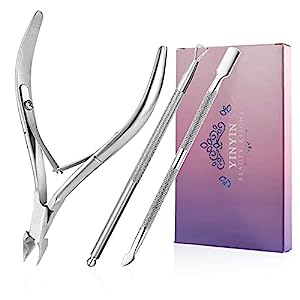 What are cuticle scissors used for?

Cuticle scissors are little scissors that are used to trim the dead skin at the root of the nail, also known as the cuticle, off the nail bed. They are required for good nail maintenance as well as to avoid infection in the case of a hangnail developing. When the skin around the nail breaks, it results in a painful and easily infectious hangnail, which can get infected if left untreated.

To remove extra or dry skin from around the cuticle and nail corners, cuticle scissors are used in a similar way to nail scissors but with a narrower blade. Sharp and slender tips make it easier to access the cuticle and cut away only the dead skin, rather than shredding the live tissue as you would otherwise.

Can cuticle scissors be used to cut hair?

No, absolutely not! The result will be a ragged cut that would only serve to promote the progression of split ends since cuticle scissors are not meant to cut hair. Blunt scissors are more likely to pull hairs rather than cut them, which is something that no one wants to happen.

What is the difference between nail scissors and cuticle scissors?

Nail scissors are used to trim and shape the nails of the fingers and toes. They are often designed with curved blades in order to follow the natural contour of the nail. Because they provide superior control without damaging the nail, scissors with micro-serration are extremely good.

If you have thick nails, you may also try using nail nippers (also known as nail pliers) or nail clippers, since they provide more leverage and comfort when cutting the nail.

Cuticle scissors, on the other hand, are a thinner version of nail scissors that are used to trim away excess or dry skin from the cuticles and around the nail corners. Sharp and thin points make it far easier to get to the cuticle and cut away the dead skin than it is to tear the live tissue.

How do you use curved cuticle scissors?

The ultra-fine curved blades of a cuticle scissor are correctly aligned for precise and effortless cutting. Cuticles and hangnails are the only places where you should use cuticle scissors. To soften your cuticles, soak them in warm, soapy water for a few minutes. Cuticle scissors should be used gently to clip cuticles delicately.

Can you use cuticle scissors to cut nails?

What is the difference between cuticle nippers and cuticle scissors?

The concept of using a cuticle nipper vs a cuticle scissor is the primary distinction that impacts the decision between the two. The handles of the scissors have rings to make them easier to hold. The nippers are built without rings and with curved, broad handles to provide a comfortable grip.

Nippers are frequently used for pedicures and for trimming the cuticle on toenails, among other things. However, when it comes to removing delicate skin for a manicure, small elegant scissors are preferred.

It's vital to remember that the more comfortable the instrument feels in the hand, the better and safer the outcome will be for everyone concerned. Scissors and nippers that are properly selected are essential for maintaining the look and health of your nails.

What are cuticle scissors?

Cuticle scissors, also referred to as cuticle trimmers, are scissors with unusually sharp, curved blades that are designed to fit the region surrounding the nail more conveniently. It is common to use them during manicures and pedicures after the cuticle has been gently pushed back using a cuticle stick, which is sometimes referred to as an orange stick.

Because the cuticle protects the nail from infection, fine and well-ground cuticle scissors aid in cutting the dead skin without removing any other tissue. Scissors with thin blades and exceptionally sharp tips are the finest choice for a more accurate cut in difficult-to-reach regions.

How do you use cuticle scissors on yourself?

Then, submerge your fingertips or toes in a basin of warm water. This softens your nails, making it easier to remove the cuticles. There is no set duration for soaking your nails, but 10 to 15 minutes should be enough.

Finally, use a moisturizer. As you remove the cuticle, the area beneath it and the surrounding nail bed may get inflamed. To prevent this, apply some moisturizer or cuticle oil to the nail bed & surrounding skin. This should calm your skin and reduce the possibility of issues from trimming your cuticles.

How do you sterilize cuticle scissors?

In a clean dish, combine your cuticle scissors along with other nail tools.  Cover your tools fully with Isopropyl Alcohol. Allow them to soak for 30 minutes in the solution. If you don't have Isopropyl Alcohol, then you can boil your nail tools for 20 minutes in the water. Before handling the disinfected instruments, make sure you wash your hands. Leave them to dry on a clean clean cloth once the soaking is finished.

When done appropriately, sanitizing instruments really shouldn't cause cuticle scissors to blunt or dull prematurely. To avoid blunting the sharp edges of your nail tools while storing them, lay a piece of cloth in the bottom of the glass jar. To minimize rusting during sterilization and disinfection, make sure your instruments are of excellent quality and made of stainless steel.

How do you store cuticle scissors?

The blades of your cuticle scissors can wear down with use over time, and improper storage procedures can worsen this problem. Cuticle scissors should be maintained in a clean, tightly closed container to prevent damage and future contamination. Take advantage of the protective caps that came with your cuticle scissors to keep the sharp points from being damaged.

Clean nail instruments should always be stored apart from other equipment and supplies. Never store them in a plastic shopping bag or storage container since this might serve as a breeding ground for germs that you don't want.

As an alternative, keep everything wrapped in a clean paper towel and stored in a "clean" drawer or makeup bag that has been designated particularly for your nail instruments.

How do you sharpen cuticle scissors at home?

Take a piece of sandpaper and sand the blades down. An ordinary sandpaper sheet of 150-200 grit would do, although you might choose for a little finer grit (a higher grit number) if you want nicer edges on the edges of your cuticle scissor blades. Using the rough sides of the sandpaper to face outward, fold the sandpaper in half and start sanding.

Are cuticle scissors bad for you?

When you get a manicure, trimming or cutting your cuticles is purely for aesthetic reasons and does nothing to benefit your nail in any way. In fact, it is detrimental to the health of your nails.

The little patch of skin around your nails helps protect them from infection. When this skin is gone, your nail is left exposed to germs and fungus, making it more susceptible to infection. Cuticles must never be cut or clipped since doing so can lead to infection and nail damage.

How much are cuticle scissors?

Cuticle scissors are not expensive. They are available for purchase for as little as $4 up to $15.

*Disclaimer: Stylist Pick is a participant in the Amazon Services LLC Associates Program, an affiliate advertising program designed to provide a means for sites to earn advertising fees by advertising and linking. (19817)